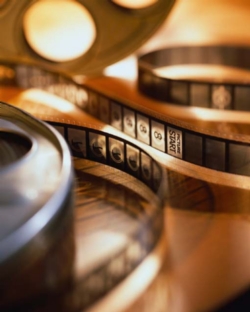 Two Foothill students were honored recently at a Bay Area film contest
Congratulations to junior William Ilgen and freshman Cameron Vaughan for being honored for their outstanding film work at the third annual Spotlight High School Video Competition Awards.
The contest drew 81 entries from students at 31 Bay Area high schools. The field was narrowed to seven winning filmmakers representing six high schools. Foothill was the only school to have two students honored for their work.
Will won the best directing award for his film, The Interview. Cameron won the best special effects award for his film, Time Machine.
Winning students received Adobe Premiere editing software, Gorilla production management software, gift bags from KCSM-TV and $500 scholarships to the College of San Mateo.
The competition was hosted by the College of San Mateo and PBS station KCSM, which will highlight the work of Bay Area high school students starting in October. The winners were announced at a ceremony at the college in early May.
Click here for a story about the contest and a complete list of student honorees.
Published May 27, 2009 Print