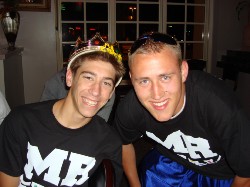 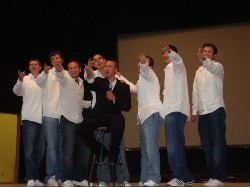 Seniors Joseph Cheney and Nick Valenziano represented Foothill at the Mr. EBAL contest
Jennifer Beals has nothing on Foothill senior Joseph Cheney.
Joseph impressed judges with his imitation of Beals’ famous Flashdance moves, complete with the dramatic water splash at the end. The wacky spoof of the 1983 hit movie won Joseph the first-ever title of Mr. EBAL, complete with a dazzling plastic crown.
“I’m really stoked,” the newly crowned Mr. EBAL said the day after winning the coveted title. “I had a great time doing it. There were a bunch of really great guys involved with it. I got to show the world my talent.”
Joseph wasn’t even born when Flashdance took the country by storm with Beals’ fancy footwork and oh-so-‘80s fashion sense. Instead, Joseph was inspired by a recent KIA Motors commercial that spoofs the famous dance steps.
“I’ve seen part of the movie, but it wasn’t my era,” Joseph admitted. “I saw the commercial, so I knew it was funny.”
Joseph and classmate Nick Valenziano, who was crowned Mr. Foothill earlier this year, represented Foothill at the first-ever Mr. EBAL contest held May 21 at the Alameda County Fairgrounds.
Students at schools in the East Bay Athletic League, or EBAL, came up with the idea of pitting the schools’ male pageant winners against each other in a broader competition. Each school has its own version of Mr. Foothill, a campy and riotous mockery of beauty pageants.
“The schools in our athletic league came together in the spirit of friendly competition,” Foothill’s leadership teacher, Scott Sears, said. “It’s the first time it’s ever been done. Hopefully, it will continue to be done and improved upon.”
Six schools took part in this year’s contest – Monte Vista, California, San Ramon Valley, all in the San Ramon Valley school district; Granada in Livermore and Foothill and Amador Valley. In addition to the pageant winners, a second contestant was chosen at each school by the leadership classes.
Joseph was chosen by Foothill’s leadership students to join Nick at the competition.
“I’m the best, you know,” Joseph said with mock bravado. “I think they saw that in me.”
Nick wowed judges at the Mr. Foothill competition by dressing in outrageous drag to lip sync a Shania Twain song. The crowd went wild for his strutting.
Nick stunned the Mr. EBAL crowd by pulling a new trick out of his hat – a brand-new routine to the Backstreet Boys’ song, Perfect Fan. Nick and his seven backup dancers dedicated the song to their moms, gracing each blushing mom with a rose after the performance.
“My mom was so surprised,” Nick said. “I’ll never forget the look on her face.”
Click here for a YouTube posting of Nick's Shania Twain performance.
Click here for a YouTube posting of Joseph's Flashdance performance.
Posted