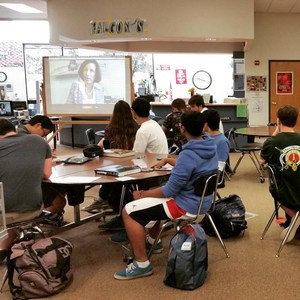 Students learn world events with online discussion
World issues took center stage at Foothill recently when students used technology to interact with the United Nations High Commissioner for Refugees (UNHCR) spokesperson.
Students in German, AP human geography and international relations met with spokesperson Melissa Fleming using Google Hangout, an online video chat system. Fleming and students discussed the Syrian refugee crisis and the European response.
Students raises questions about insufficient funding to help refugees, how media images of refugees affects reactions of European citizens and what students can do to help.
Fleming, speaking from her office in Geneva, Switzerland, agreed that funding is sorely limited. She pointed out the enormous disparity between humanitarian and military budgets. Given the seeming inability of the national community to prevent or stop the wars that drive people from their homes, Fleming noted that helping the victims is the least that can be done.
Education is a critical tool in preparing the future of war-torn countries, Fleming stated. Too few refugee children are in school, yet they may one day return home to rebuild their countries. Without education and training, war and strife may be perpetuated. The international community should seize the opportunity to transform these children through education so that they may return to their countries as agents of positive change, rebuilding and reconciliation.
TV images and photographs are extremely powerful in shaping public opinion, Fleming said. Statistics and reports of millions of Syrians fleeing their homes seemed to have little effect on the international community. However, the image of the body of a little boy washed up on a beach in Turkey -- a Syrian refugee whose overloaded boat capsized while crossing the Mediterranean -- prompted widespread dismay in the European public, which led to the German government welcoming Syrians into that country.
Students can help by learning about the plight of refugees, their rights and circumstances, Fleming said. Start at the community level to find programs that resettle refugees. Get involved with social media groups that support refugee causes and donate money to UNHCR and other organizations.
Click here to see the entire discussion online.
Submitted by library assistant Varupi Gupta
Posted Sept. 28, 2015