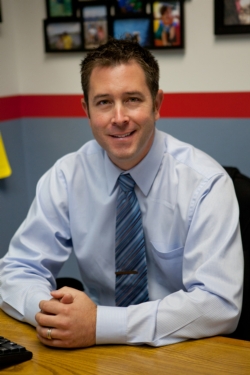 Foothill’s administrative staff is expanding with the addition of Ryan Templeman as the school’s new vice principal.

Templeman most recently served as vice principal at both Harvest Park and Pleasanton middle schools before landing the vice principal job at Foothill.

“Foothill was very intriguing to me,” he said. “They have a real strong administrative team and a new leader with (Principal) Jason (Krolikowski). It looks like a great place to work.”

The 1998 Amador graduate attended St. Mary’s College in Moraga, earning a bachelor’s degree in history and spending an extra year getting a single-subject teaching credential in history.

Templeman did his student teaching at Amador in 2003 before being hired as a full-time history teacher for the 2003-2004 school year, a job he held for a full decade. He also served as assistant coach for the varsity baseball team for seven years and the girls golf team for two years.

He moved into administration this school year when he took on the dual role as vice principal at the two middle schools. The move to administration was a natural transition, Templeman noted.

“When I was teaching, I was always involved in many other leadership aspects on campus to help make the campus a better place,” he said. “I was always interested in more than just the classroom. I love the teaching, the kids and the interaction. I miss that. I don’t miss the grading.”

The Foothill vice principal job came open this spring when Rich Gorton left to take a principal job in Walnut Creek. Retired Amador principal Jim Hansen stepped in for the remainder of the school year, giving Foothill’s leaders time to find the right person for the job.

“I can’t say enough (good) about him,” Krolikowski said. “Ryan has a tremendous experience in the classroom. He’s taught almost every course you can in social studies and has been an AVID coordinator for Amador. His experience at the middle schools this past year has provided him with a lot of opportunities to have experience as an administrator.”

It’s challenging to juggle the vice principal job at two schools, Krolikowski said, and “to pull that off successfully and have both sites pleased with his work certainly played in his favor for our selection.”

While Templeman enjoyed his middle school stint, he was eager to get back to high school.

“I miss the energy of high school,” he said. “There’s a lot a spirit at the high school level with sports and clubs and all the various activities that are going on. I miss that level of excitement and energy.”

His goal is to help all students reach their full potential.

“Students are the first priority,” he said. He'll work at “trying to encourage kids to get involved in as many things as possible (and) trying to get staff and administration to support kids to try as much as they can to find out who they are as people.”

Templeman lives in Livermore with his wife, Toni, and son Brayden, 4, and daughter Zoe, 2.

“Ryan will be a great fit for our current administrative team,” Krolikowski said. “He has energy, he has the ability to create positive relationships with both students and staff members.

Student welfare and success drives all of his decision-making.”

Templeman combines his love of sports and travel for a personal goal of seeing games at every Major League Baseball stadium in the country.

"That’s been something I've been working on since I graduated from college," he said. "Every summer, I would always go on a trip across the U.S., and I always planned it around baseball season and when I could see a game. I’ve done New York and Boston and saw the Yankees, Mets and Red Sox. I think I’ve seen 18 out of the 30 ballparks."

Foothill’s newest vice principal starts his job July 1 and plans to work during the summer to be up to speed for the start of school in August.

“I’m just excited to be part of the community,” he said. “I know it’s a very spirited and cohesive staff. There’s a lot of momentum at the school right now. I just want to be a part of that.”