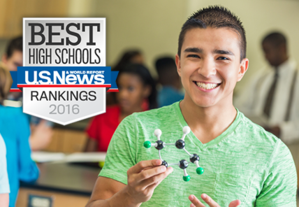 Foothill gets elite gold award
Foothill has been honored once again with an elite gold ranking through a national magazine's closely watched annual list of the best public high schools in the nation.

U.S. News & World Report ranks Foothill as No. 79 in California and No. 489 nationally. This is Foothill's fourth year to get a gold ranking for high college readiness, which only 500 schools nationwide receive.

"We are very proud of this recognition as this is a testament to current and former students, teachers, parents and staff members," Principal Jason Krolikowski said. "We will continue to challenge ourselves through a lens of continuous learning and school connectedness where everyone is valued and appreciated."

The magazine collected data on more than 28,000 public high schools in 50 states and the District of Columbia. California had more than 650 schools make the magazine's prestigious list. Click here for a story about the list and how rankings were made.

U.S. News joined forces with the RTI International, a North Carolina-based research firm, to evaluate schools on overall student performance on state-mandated assessments, as well as how effectively schools educated their black, Hispanic and economically disadvantaged students. Performance on Advanced Placement and International Baccalaureate exams was then used to determine the degree to which schools prepare students for college-level work.

Click here to see Foothill's ranking on the magazine's website. Amador Valley was also named a gold school at No. 47 in California and No. 315 nationally.
California was second to Maryland only in the number of gold and silver schools. Slightly more than 27 percent of eligible California schools were awarded gold or silver rankings.