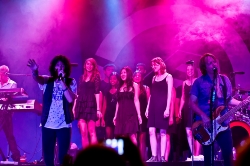 The choir won the rare opportunity to sing with Foreigner through a local KKIQ radio contest. Choirs were nominated for the honor and then votes were cast online. Foothill's choir was the overwhelming winner of the chance to croon I Wanna Know What Love Is when Foreigner performed at Wente Vineyards on July 11.

"It was great," choir member Jacob Richey said. "Foreigner was great. I'd heard of them. I downloaded Foreigner 4 when I heard we'd won the radio contest. A few of the songs I'd already been familiar with."

Richey had "absolutely" heard the 1984 power ballad I Wanna Know What Love Is.

When choir teacher JoAnn Koobatian learned her choir had been chosen, she quickly set out to recruit students available to perform and pull together a brief practice session so students could learn the chorus and harmony.

"My kids learned it in 10 minutes on Monday and performed it Wednesday night," Koobatian said. "Since we are on summer break, only 13 of my kids were available. It was 104 degrees that day, but we still really had a great time."

Koobatian admitted it was "surreal" to see her students singing on stage with Foreigner since she'd been a huge Foreigner fan back in the '80s.

"I saw them at Day on the Green with Journey, so it felt pretty awesome having my students up there with them," she said.

Prior to the on-stage performance, the choir students sold CDs and raffle tickets to raise money for the Grammy Foundation and Grammy in the Schools. Foothill's choir was awarded a $500 donation in addition to the honor of performing with Foreigner.