DI Team Second in the World 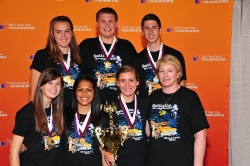 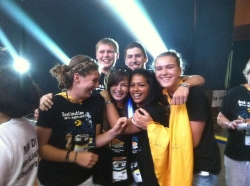 The DI team members, all sophomores, are Ryan Hobbs, Shona McCarthy, Alex Monks, Melissa Muller, Nadia Siddiqi and Nick Soldati. They traveled to Knoxville, Tenn., for five days last week to compete in the Global Finals. The competition drew 1,276 teams from 45 states, seven Canadian provinces and 13 countries. The finals are billed as the world's largest celebration and competition of creativity and problem-solving skills.

The team, dubbed It's an Ego Thing, tackled the Coming Attractions challenge. They researched two cultures (Celts & Aztecs), created a story that would make a good movie trailer, wrote a script, built a set, made costumes, created a soundtrack and practiced. Their budget for all items used in the presentation could not exceed $125. At the finals, they had 1 minute to set up and 4 minutes to present. All work and ideas had to come from the team with no adult help.

The judges were clearly blown away by the Foothill team's presentation, awarding the team the highly sought-after Renaissance Award in addition to the second-place title.

"This mesmerizing movie trailer transported the audience and (judges) into an ancient world," the judges wrote. "The visually stunning performance was enhanced by the use of everyday materials; candy wrappers and fabric scraps came together to form a 12-foot ocean, and 2,750 pieces of magazine were transformed into the beads of an Aztec king. Every element of the presentation came together to create a powerful experience that brought tears to the (judges') eyes."

Foothill won the Renaissance Award for the team's outstanding design, engineering, execution and performance. The award recognizes teams that show extraordinary amounts of effort and preparation.

The Foothill students competed against 78 teams in the senior-level challenge to win second place in that category. The students won a group trophy, plus medals for each team member.

DI is an educational program in which student teams solve open-ended challenges and present their solutions at tournaments. Teams are tested to think on their feet, work together and devise original solutions that satisfy the challenge requirements. Participants gain more than just basic knowledge and skills; they learn to unleash their imaginations and take unique approaches to problem-solving.

The team is advised by parent Judy Lawrie.

Congratulations to these hard-working and creative students for winning such impressive titles at their first-ever Global Finals.