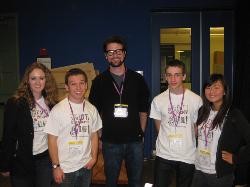 Students from 45 middle and high schools, including 16 in the Bay Area, attended the annual convention that celebrates all things Latin.

Foothill was showered with a variety of honors, including best new chapter in the state and first place chapter statewide (small school).

Alyosha Bendebury, Katie Downey, Diana Fu and Jacob Richey placed second in the state in the Latin 2 Certamen competition, a Jeopardy-style trivia contest that puts students' Latin knowledge to the test. Students not only must have a firm grasp of the language, but they also must have a broad knowledge of Latin culture and history.

Jacob Saldinger waltzed away with a $2,000 college scholarship, one of only four awarded. He applied for the scholarship by submitting information about his academic studies and extracurricular Latin activities. He also wrote an essay about why he studies Latin. The scholarship requires Jacob to study Latin in college for at least one year.

The students were accompanied by teacher Eric Heinitz.