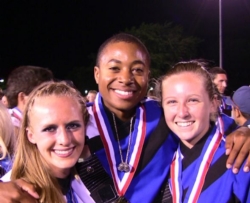 This is the third world championship title for Tevin Mitchell, 2011 graduate, and senior Grace Miller. It's the first championship for sophomore Paige Arcieri. Tevin and Grace play percussion, while Paige is part of the color guard.

The Blue Devils, based in Concord, is a highly skilled competitive drum and bugle corps. The corps that won the international title is the "B" corps, which includes Bay Area students ages 13 to 18. (There's an A corps for young adults and a C corps for younger students.)

The three Foothill students are on the Blue Devils' B corps. The corps members spent their summer rehearsing six days a week, 12 long, grueling hours each day to prepare for the world championships in Indiana. They competed in shows across the country before making it to the finals.

The Blue Devils B cinched its third straight open class world championship with a score of 95 at the open class finals in Michigan City, Indiana on August 9. The Blue Devils narrowly edged out the Oregon Crusaders by a mere three tenths of a point.

The Blue Devils join the ranks of only two other open-class corps and four corps in any division that have won three championship titles in a row. The California corps had a nearly perfect season, winning all but one competition in their show Synchronicity.

Congratulations to Tevin, Grace and Paige for being part of such an outstanding organization.