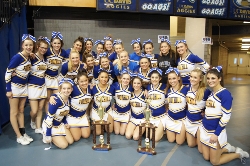 Both teams will advance to the national competition in Anaheim in March.

Congratulations to the hard-working and talented girls on both cheer teams!

PHOTO: Both teams pose with their championship trophies.