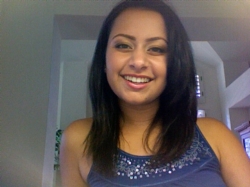 "I felt like a lot of people were bailing out of the dances," Evelyn recalled.

The 16-year-old junior, a third-year staff member with the school's InFlight newspaper, brought up the topic with colleagues at a local newspaper chain's teen advisement board.

Evelyn took that seed of an idea and ran with it, writing a column about her personal feelings about school dances. The bumping and grinding on the dance floor bothers her. The blaring rap music make it impossible to talk with friends. She abandoned the homecoming dance in favor of a more intimate evening with close friends.

The editors at the Bay Area Newspaper Group (BANG) liked Evelyn's column and ran it recently in the chain's newspapers, including the Oakland Tribune, San Jose Mercury News and Tri-Valley Herald. It was Evelyn's first time to be published outside of school.

"I posted it on Facebook," she said of her first professionally published article. "I got a lot of 'Wow, I really like the way you presented the argument.' A lot of people agreed with me. I haven’t gotten a lot of feedback from people who don’t agree with me."

Evelyn started with Foothill's newspaper her freshman year as a general assignment reporter, advancing through the ranks to be features editor this year.

"I really enjoy it," she said. "It’s a real newsroom process. It’s all up to you. You don’t get assigned articles. You really have to push yourself to get your name out there. I also like that every month, a group of us meets. It’s nice to have a room of students who all think alike."

Evelyn's not certain how far she'll go with journalism, but speculates that she may want to forge a career as a magazine writer since she enjoys writing features and columns. She is eager to float more ideas to the BANG editors and see more of her columns in print.

"You can pick an idea," she said of the process she enjoys. "If they approve it, then you start writing for them. It’s all up to you. You have to take the initiative to do it."